Yellow has never been my favorite color. I prefer blue myself. Yet, I am beginning to love the retinal challenging color of yellow more and more. It is the color of disaster relief shirts and symbols, so often seen recently in Alabama.

As I traveled across the vast areas of our state so adversely impacted by the historic outbreak of tornadoes, I saw numerous state conventions working in various places. The yellow shirt army from 12 state conventions, including Alabama, was hard at work, doing what these people do best. They were helping hurting people work their way out of the rubble and ruin of their tornado-ravaged lives.

As an Alabama Baptist, I wanted to pause from the rigors of disaster relief response and offer a public word of gratitude to all of the volunteers who together served for a total of 11,016 work days in disaster relief during this time of need. I tried to say thank you to those I saw in the areas where I traveled, but of course I couldn’t speak to all them individually.
Let me name the state conventions called out to assist us here in Alabama during this difficult time. Arkansas Baptists, served so ably by Emil Turner, executive director, were sent to our state, even though they had been hit by the tornado outbreak too. Emil and I have conversed regularly during these emotion-packed weeks following April 27.

Georgia was hit pretty hard by the tornado outbreak too, but they came here to help us with our massive challenges. Executive Director for Georgia Baptists Bob White is a native Alabamian, and he loves our state. He has pledged support in other ways as well.

Despite the fact that Bill Mackey is retiring as executive director for Kentucky Baptists, he was on the phone praying with me very soon after the tornadoes did their gruesome work. Kentucky Baptists came as disaster relief volunteers too, and they were sorely needed.

Louisiana is no stranger to the ministry of disaster relief. Their executive director, David Hankins, was quick to respond to the need. His yellow shirt regiment made a difference in our beloved state. He and his executive board responded generously to our pressing needs in other ways as well.

Our partnership state convention, Michigan, had teams on the ground in north Alabama as soon as possible. These fine people were trained by our disaster relief workers. One of the volunteers was Bobby Gilstrap, executive director for Michigan Baptists. He and I connected via podcast during his stay in Alabama. Their labors of love are so warmly appreciated by Alabama Baptists.

Our nearest neighbor to the west, Mississippi, was present and accounted for in our state during the critical response time. As you know, Mississippi was hammered by the same storm front as we, yet across the state lines the yellow shirts came to help us with our needs. Jim Futral, executive director for Mississippi Baptists, was so kind to call and offer assistance.

Oklahoma has long been known as tornado alley. They have vast experience with this kind of weather-related disaster response. Anthony Jordan, executive director for Oklahoma Baptists, contacted me expressing concern and support. Their yellow shirts were working hard among us as we sought to respond to those in need.

South Carolina Baptists added to the ranks of the yellow shirt army. Their executive director, Jim Austin, called and pledged prayer support during this most difficult time. South Carolinians know something about hurricanes too. Their work was gladly received by those of us seeking to deploy trained workers across the massive geographic regions of our state hit by the 38 tornadoes.

The Southern Baptists of Texas were out in force during the past weeks. I enjoyed meeting some of them while they worked in the Tuscaloosa area. Jim Richards, the executive director of the SBCT, kept in touch with me via social network, and for that I am grateful.

The Baptist General Convention of Texas is without an executive director currently, but that did not stop their flow of yellow shirts coming into Alabama to work alongside the other 11 state conventions. I met some of them in the southern part of Tuscaloosa as I made visits in the area. They were all smiles while they did their work in our state.

Disaster relief volunteers from 11 state conventions, plus Alabama Baptists, made for a perfect number of 12. We may not be the 12 tribes of Israel, but, I believe we were and we are the people of God at work in a time of heartbreaking need. This is just one example of how state conventions work together to make a difference for Christ by seeking to meet the needs of others. 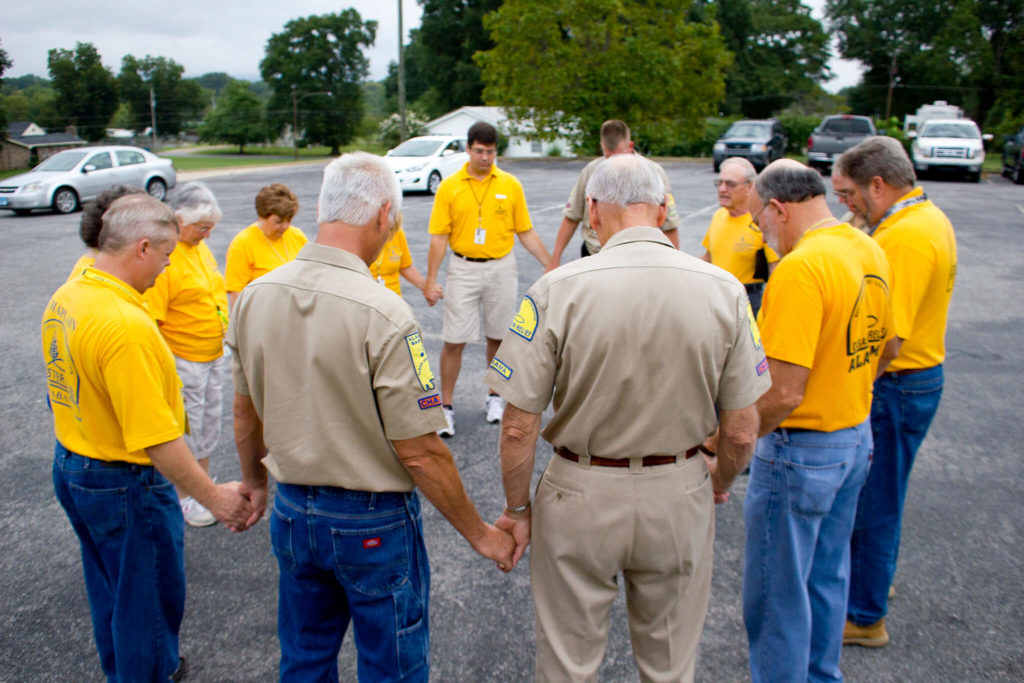